If you have read Franz Kafka’s book Metamorphosis in English, it is likely that your translation referred to the transformed Gregor Samsa as a “cockroach”, a “beetle” or, more generally, a “gigantic insect”. These renditions of the author’s original German don’t necessarily miss the mark – Gregor scutts, flails multiple legs, and has some sort of exoskeleton. His cleaning lady calls him a “dung beetle”… the evidence is not lacking. But the German words used in the first sentence of the story to describe Gregor’s new incarnation are far more mysterious, and perhaps oddly laden with metaphysical meaning.

Translator Susan Bernofsky writes“both the adjective ungeheuer (meaning “monstrous” or “enormous”) and the name Ungeziefer are negations – virtual non-entities – prefixed by one. Ungeziefer, a term from Middle High German, describes something as “an unclean animal unfit for sacrifice”, belonging to “the class of disagreeable and frightening things”. This suggests many types of vermin – insects, yes, but also rodents. “Kafka,” writes Bernofsky, “wanted us to view Gregor’s new body and new condition with the same hazy concentration with which Gregor himself discovers them.

It is probably for this very reason that Kafka banned images of Gregor. In a 1915 letter to his editor, he specifies: “The insect does not take shape. He can’t even be seen from afar. The original slim book cover, above, instead features a perfectly normal-looking man, distraught as if imagining a terrible transformation, but not actually experiencing it physically.

Yet it seems obvious that Kafka meant that Gregor had become some kind of insect. Kafka’s letter uses German Insertand casually referring to the ongoing story, Kafka used the word wanze, or “bug”. Making this too clear in prose dilutes the grotesque body horror that Gregor suffers from, and the story is told from his point of view – one that “mutates as the story progresses”. So writes the Dutch reader Freddie Oomkins, who observes further, “on a physical level, Gregor, at different points in the story, begins to speak with a creaky, animal-like voice, loses control of his legs, hangs from the ceiling, starts losing his sight and wants to bite his sister – not really helpful in determining his taxonomy. 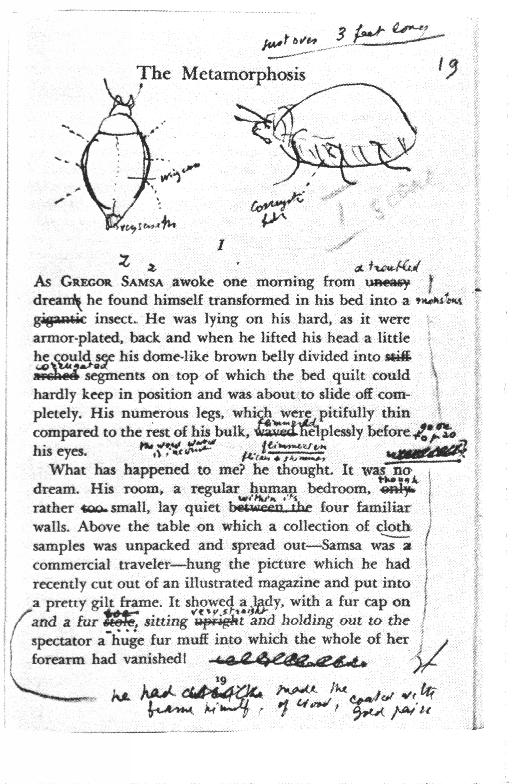 Translation and classification difficulties aside, Russian literary mastermind and lepidopterist Vladimir Nabokov decided he knew exactly what had become of Gregor Samsa. And, against the will of the author, Nabokov even drew a picture in his educational copy of the short story. Nabokov also heavily modified his editing, as you can see from the many corrections and revisions above. In one conference on Metamorphosishe concludes that Gregor is “just a big beetle” (notice he crosses out the word “gigantic” from the text above and writes at the top “just over a yard long”), and furthermore someone who is able to fly, which explains how he ends up on the ceiling.

All of this may seem very disrespectful to Metamorphosis‘ author. Admittedly, Nabokov never made a literary respect of persons, referring for example to Faulkner’s work as the “corncobby chronicles” and the works of Joyce. Finnegans Wake like a “petrified superpun”. Yet in his lecture, Nabokov calls Kafka “the greatest German writer of our time. Poets like Rilke or novelists like Thomas Mann are plastic dwarfs or saints in comparison with him. Although he is a saint, Kafka is “above all an artist”, and Nabokov does not believe that “religious implications can be read in Kafka’s genius”. (“I’m interested in bugs here, not pranksters,” he says dismissively.)

To reject Kafka’s mystical tendencies runs counter to most interpretations of his fiction. One might suspect Nabokov of seeing himself too much in the author when he compares Kafka to Flaubert and affirms: “Kafka liked to draw his terms from the language of law and science, giving them a kind of ironic precision, without the intrusion of feelings. intimates of the author. Ungeheueres Ungezieferhowever, is not a scientific term, and its literary origins in Middle German – which Kafka would have known since his studies– clearly connote religious ideas of impurity and sacrifice.

With all due respect to Nabokov’s formidable scholarship, it seems in this case at least that Kafka fully intended vagueness, what Bernofsky calls “blurry perceptions of confusion”, in language “carefully chosen to avoid specificity”. “. Kafka’s art consists in this ability to exploit the old stratifications of language. His almost kabbalistic treatment of signs and his aversion to engraved images may dismay and torment translators and certain novelists, but it is also the great source of his strange genius.

Note: An earlier version of this article appeared on our site in 2015.

How insomnia shaped the creative process of Franz Kafka and the writing of The Metamorphosis: a new study published in The Lancet

The Metamorphosis of Mr. Samsa: A Wonderful Sand Animation of Kafka’s Classic Story (1977)

Josh Jones is a writer and musician based in Durham, North Carolina. Follow him on @jdmagness